Railway police in Tamil Nadu state took a giant step in combatting this crisis by launching a first-of-its-kind anti-trafficking helpdesk to better protect the poor.

“Human trafficking is a growing crime, and it needs to be combated immediately,” shared Mr. Balakrishnan, the Deputy Director General of Railway Police in Tamil Nadu. “As railway stations are used as transit points to traffic victims, setting up a filter at these junctions is essential.”

The new helpdesk—which was launched on June 20—will help identify individuals and families at Chennai Central Station who exhibit signs of human trafficking and will intervene when evidence suggests a crime. The helpdesk team will also help study the prevalence of trafficking amongst migrant workers who travel through.

This innovation was years in the making and is based on collaborative research from IJM and the railway police.

“It is important that we build the capacity of officials to outdo criminals and effectively combat the crime,” remarked Inspector General Birendra Kumar. “A recent workshop on International Missing Children’s Day, with IJM as a knowledge partner, was highly informative to demystify laws pertaining to human trafficking.”

In addition to police vigilance, Kumar also highlighted the need for educating the vulnerable poor and even potential traffickers, saying, “Victims need to be aware of the dangers lurking around them, and criminals need to be aware that there will be stringent consequences when caught.”

Since its launch, the helpdesk has already intervened in four trafficking cases, including a group of nine girls who were being trafficked from Odisha state to Tamil Nadu for work at a spinning mill.

Tamil Nadu government and IJM hope this proactive resource will become a model replicate across the country—ideally keeping thousands of travellers and migrating workers safe from human trafficking. 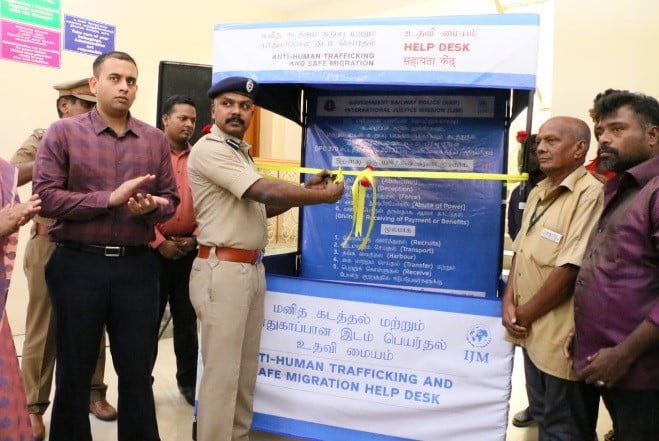